It has been a while….

Reaching for the Stars: The Astrolabe in the Islamic World. Christopher Parkin, Museum of the History of Science, University of Oxford, workshop. Photo: Jenny Siung, 2017.

It has indeed been a while since my last blog post but for very good reasons. In February I attended a very insightful conference organised by Manchester Museum From Malacca to Manchester: Curating Islamic Collections Worldwide (22-24 February 2017). Numerous examples were presented from across the UK, Europe, the Middle East, South Asia as well as the USA. To say presenting Islamic collections in museums is complex is an understatement. This conference is the first of its kind and is part of a funded research programme by the John Ellerman Foundation in the UK and Manchester Museum.

I work with East Asian, European and Islamic collections and have an overall sense of the cultures represented in the museum, yet to have in-depth knowledge of every artistic and cultural aspect is a challenge. This conference opened my eyes to the rich and incredible histories as well as themes reflected in Islamic collections; how they tell the story of histories and where they sit in a global context today. How can museums counteract the negative representation of Islamic culture today?  This was addressed in the keynote  Pulling the Past into the Present – Islamic Art and the Museum in Times of Migration and Extremism, Dr Stefan Weber, Director of the Museum of Islamic Art, Berlin, Germany.  He looked at how the museum is re-framing their engagement with Muslim communities in Berlin with particular focus on engaging Muslim artists with local Berliners as well as offer tours by Syrian refugees for the immediate refugee community. It has captured the imagination of many and provides a ray of hope for the displaced and traumatised. Dr Weber also looked at key components of displays in the museum and how they are viewed and understood by visitors. Many people get their information on Islam through the media e.g. death and violence often associated with Islam. With the current trend in global politics, there is a process of ‘othering’ in society to identify oneself and that of others. He questioned whether we have a certain picture i.e. orthodox or other views society has from which objects come from and it is important to understand the diversity of Islamic collections in museums.

The following presentations were excellent and provided insight to how Islamic collections have brought communities together (Birmingham Museums & University) or display for the first time the story of Hajj to UK audiences in the British Museum.

Other core themes included the representation of faith, identity, interpretation of material for exhibition, new installations worldwide, communities and outreach. I presented a case study of an interfaith learning resource Ways of Seeing II exploring world faiths in a secular manner using museum objects aimed at teachers both north and south of the border including Islamic collections. Key challenges include the context of Irish primary and post-primary schools which are predominantly Roman Catholic in ethos yet the population of Ireland has changed dramatically since 1997-2007 (Celtic Tiger) and the need for the curriculum to reflect the changing profile of our children in schools.

The Creative Museum project continues a journey of exploration and this time it landed in Zagreb, Croatia for a partner meeting headed by Radiona Maker Space hosted by the Technical Museum and conference Creative Museum A/C/T/S Zagreb 2017.

The one-day conference introduced the audience to a number of case studies developed and carried out by members of the project including a number of initiatives such as the project itself with Cecile Marsan, Maker-in-Residence with Jenny Siung, Recommendations with Jo Anne Sunderland Bowe, how museums and makers can collaborate to develop programmes for audiences as well as open museums to external creatives such as Museomix. 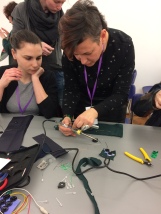 What happens next? As this is the second-last event and partner meeting, we are developing our plans to take the Creative Museum project to wider networks as there is a demand from museum professionals and makers to bring creativity to other institutions and creatives. Watch this space for more updates.

To complete the circle, I attended and presented at the Asia Europe Museum Network (ASEMUS) conference in New Delhi with support from ASEF. (ASEMUS features the Creative Museum project analysis of good practice on their website). This network fosters links between Asian and European museums with Asian collections. It is an active network with numerous exhibition and educational exchanges. One key component is the bringing together of the network every two years to discuss relevant current topics. Towards a Culture of Accessibility in our Museums: Good Practices and Challenges addressed digitisation, access for visitors including those with disabilities, the use of technology in engagement with audiences, urban renewal and its impact on museums and the role of regional heritage.

I presented five examples including museum intercultural education; collaborations with teachers and schools to understand world faiths through museum collections; how museum blogs can target hard-to-reach audiences as well as specific learning groups; handling objects for visitors with impaired vision and learning disabilities and dementia-friendly tours and the Creative Museum project.

There is an insightful report of the proceedings of the conference and to summarise the thinking behind the conference, Kennie Ting, the Director of the Asian Civilisations Museum and Vice-Chair of ASEMUS described the following:

Museums need to assume a more social role, engaging with the communities; audiences have also become more sophisticated and expect to be involved in how museums operate; and the digital shift requires museums to engage online. These three dimensions would lie at the core of subsequent discussions.

This pretty much sums up the events described above!